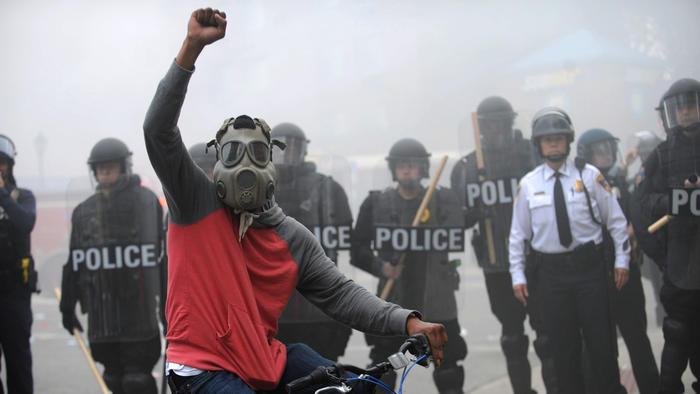 On April 12, Freddie Gray took off running after making eye contact with a police officer near at Gilmor Homes, a public housing project in northwest Baltimore. Apparently in response to this suspicious behavior, Gray was pursued and stopped by police. While an investigation is currently underway to determine the precise order of events, it appears that at some point during the struggle or during the ride to the police station, his spinal cord was severed. Gray was taken into police custody, at which time medics rushed him to a hospital. Shortly thereafter he slipped into a coma, and he passed away on April 19.

Today, Mr. Gray’s family and thousands of mourners gathered to memorialize his life and to reflect on the challenges facing young, Black men from poor neighborhoods more generally. As Reverend Jamal Bryant articulated in described in his eulogy, men like Gray are “confined to a box” made up of poor education, lack of job opportunities, and racial stereotypes. He pointed to the wealth disparity apparent within the city of Baltimore.

Sixteen thousand abandoned or vacant homes, 25 percent unemployment — we don’t need more police, we need more jobs. Why can’t the west side get the same things downtown gets?

Protests in Baltimore since Gray’s death have been more violent than most of the protests that are sweeping the U.S. in response to police violence against Black people. Over the weekend, seven officers were allegedly injured and 35 protesters were arrested. But today things took an especially dark turn: school-age protestors started lobbing bricks and other objects at police officers, injuring 15, two of whom are in the hospital. 27 protesters have been arrested today. Governor Larry Hogan declared a state of emergency in the city of Baltimore. The National Guard has been called in (about 1,500 members have been deployed), and a 10 pm – 5 am curfew has been imposed through May 4.

Stephanie Rawlings-Blake, Baltimore’s mayor, expressed frustration at the approach taken by rioters, accusing them of “trying to tear down what so many have fought for.”

“It is idiotic,” she said, “to think that by destroying your city you’re going to make life better for anyone.”

Loretta Lynch, who was sworn in today as Attorney General, urged protestors to take choose nonviolence. She also promised “to work with leaders throughout Baltimore to ensure that we can protect the security and civil rights of all residents” and “bring the full resources of the Department of Justice to bear in protecting those under threat, investigating wrongdoing, and securing an end to violence.”

Does “all violence” mean, I wonder, ending police violence against Black men in Baltimore, too?

Many of the people taking to the streets in Baltimore today were there to prevent violence, not promote it. The New York Times spoke with Malcolm Taylor, a 39-year-old bus driver who saw students he coaches in youth football among the rioters and decided to rally a “calming force” and try to deescalate the situation. “We converged, we prayed, we sang, we stopped some fights, we stopped some rioting,” Mr. Taylor said. “We just held them by the hand and talked to them, and told them to calm down.” Other peaceful protesters include members of the 300 Men March, an activist group committed to reducing gun violence.